A.E. Ramassà is a member of the African Youth Initiative Network (AYINET) and an ambassador of the United Nations Sustainable Development Goals (SDG). The NGO AYINET is an organization that has been created by Ugandan activist Victor Ochen, who was the youngest African candidate to have been selected for the Noble Peace Prize in 2015. He is currently a global adviser to the United Nations High Commissioner for Refugees (UNHCR) and an SDG ambassador.

The projects carried out by the club are aimed at fighting for the social inclusion and sustainable development of children and adolescents who find themselves in a situation of socio-economic vulnerability, facilitating access to education and health, and always with sport as an integrating tool.

If you want to know more about the SDG of the UN and AYINET, we encourage you to visit the following webpages:

The relationship between Ochen and A.E. Ramassà was born during the trip that the club made in Uganda in April 2016. The Ugandan, who was captivated by the social and educational work that the club and the town have been doing in Africa since 2014, wanted to recognize thisby naming the club as the ambassador of Target 16 of the United Nations SDG. Later, in 2018, A.E. Ramassà signed a new collaboration agreement with AYINET, and since then has acted as a global ambassador for SDG.

Victor Ochen is one of the main activists of the African continent. After a childhood marred by the war in Uganda, in 2005 he founded the NNGO African Youth Initiative Network with the aim of providing physical, psychosocial and rehabilitation care to all victims of the Lord’s Resistance Army (LRA), especially child soldiers. 15 years later, Ochen continues to work to make today’s youth become agents of peace.

In order to commemorate this exclusive honour, the club has designed a special kit that it wears at events that it has planned together with the UN and during which the club plays the role of its ambassador. This outfit is a departure from the traditional red-and-yellow striped t-shirt the team usually wears to represent itself and is a choice of plain sea blue on which the United Nations symbol is prominent.

Several well-known sports people, such as former centre-back and captain of FC Barcelona Carles Puyol, as well as former players Carles Rexach and Julio Salinas, and Málaga FC’s goalkeeper Carlos Kameni have wanted to show their support for the solidary work thatthe club is carrying out in Africa. 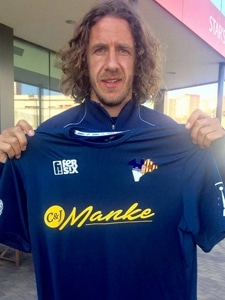